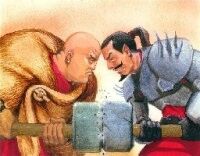 Every doomlord/doomlady level 8 or over goes to the horde noticeboard and registers for this tournament when it comes around every month. There is nothing to lose and everything to gain!

Beside the murderous battles for soul-energy Doomlords sometimes compare their skills in a more formal way to prove the power of their horde. Once in a month a championship is organized where the winners receive a special medal. There are more categories on this championship, thus everyone can fight with similar level warriors. At the beginning of each duel, the HP and SP of the combatants and their pets will start from maximum. The damage, soul-energy and experience points received from the championship are not real and do not have any affect on the players involved.

The championship is announced 3 days before it begins, and the registration period is any time up until 23:59 server time the day before the event (if it starts on the 3rd Jan at noon, registration is permitted any time between when it was announced and 2nd Jan 23:59).

After registering for the event, attributes, skills, pets, levels, , etc. will be saved. It can be beneficial to enter as early as possible, so a player could get into a lower level category that they have a higher chance of winning. At the time of entry, HP/SP status does not matter as it all gets maxed during the championship battles.

During the event, all the players that signed up are split into categories, dependent on their level. There must be at least 5 players per category and if there aren't, NPC's are added to make up the numbers. Then, a knockout tournament takes place where opponents are matched and one winner comes out. Luck has an enhanced effect in battles, so the statistically weaker characters may be especially lucky. If all opponents are defeated, the victor is awarded with a blue championship medal. There is a winner of each category and these can be found on the world events page after the event is completed.

The championship always takes place at noon on the first Friday of the month, unless that falls on the 1st or 2nd, in which case it takes place on the first Wednesday. Battles in this championship take place like a normal duel, limited to just one combat round (1 spell cast, multiple melee attacks dependant on the toughness skill of combatant).

A new style of championship, named Championship:To the Last Blood, was announced on the Dec. 2011.

Taking part 2 weeks after the original championship, this championship follows the rules of the original with the exception of one thing, the duel lasts until a player is knocked unconscious. In this championship, the combat rounds are repeated until one player either reduces their opponent to 1 HP or executes them. Between combat rounds, the secondary effects of spells are nullified, such as the effect of blinding light (-18 att) would be renewed each time it was cast and the effect would not stack.

The categories are created based on levels of the players.

It is hard to miss the registration for this event, but when to sign up is a tactical move; players may want to enter early so they can join a lower levelled bracket, or they may want to put it off for as long as possible to get better equipment. There is a small soul-energy reward for simply participating- this value goes up the further a player gets in the tournament- Needs verifying Phalanxii 03:52, December 17, 2011 (UTC)

Medals earned through the championship give a significant boost to stats in the standard game. This bonus is worked out in one of two ways (whichever provides the highest stat boost takes effect):