War of the hucksters 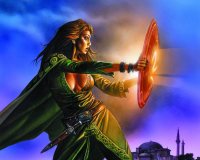 The war of the hucksters is an event first introduced on 18/4/2011 on all worlds. It involves Lady Alvariel's four maids, Katherin, Ericath, Marietta and Agnaesh (the same hucksters from The Map) as they fight for dominance of the market.

The four maids met to share out new found territories amongst themselves, but the atmosphere was thick with tension and not only was no agreement made, but the meeting ended with a fight. Each huckster went their separate ways and spent a week recruiting people to join their army and fight the other hucksters, offering highly prized rewards to those who excelled in their duties.

During the war of the hucksters, you can join any army, or you can choose to stay neutral in the conflict. If you join an army, you can\'t quit until the end of the war - but you can betray your lady, and desert to another! If you participate in the event, the duel window will be slightly different from the usual. You will see the list of those who participate as well, and you can attack anyone who is not in your team. You can even attack a fellow horde member if he/she is in a different army, but to attack a member of your clan you need to have an infection of 100%.
The combat goes by the normal rules of dueling, you can complete quests, you can drag people to the torture chamber. But the SE reward is not based on your opponent's SE, you always get a fix amount, depending on the target\'s level, which he/she does not lose (like enery harness). Some effects don\'t work (like soul-draining, scarab, punisher items). These duels do not count towards normal clan wars. If you have energy harness, you get proportionally more SE. Diamond clan members also get some more SE than others. No other modifiers apply.
Attacking costs a duel point and an event point (you get event points for hunting after you entered the war). After each duel, you will tend to your wounds, depending on your heal wounds skill. Horde hatred skills do not apply, but you can buy from the huckster a special relic which can help you in the war.
We count your victories, you will get rewards based on this number. If you desert to another huckster, your victories will be set to zero!
During the event, additional crystal horde members will join the fight. You can attack them as well in the event\'s duel window.
The normal duel window will be still available, where you can fight by the normal duel rules those who do not participate in the event: if either combatant did not enter the war, normal duel rules apply.

The event lasts for 3 weeks. To be eligible for a specific reward, you need the following number of victories: