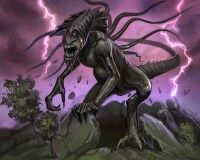 The Xeno monsters are the pets of The Enemy and during this event, several queens rise up and wreak havoc among the doomlord population.

--mid way through the event--

The Xeno queens are effectively epic monsters that can be attacked by the entire doomlord population, but regenerate slowly over time. Winning in battle yields no experience or soul-energy unless you have energy harness, in which case the event can be extremely profitable. The SE gained from a won battle is worked out by this formula __________.

Rewards are only given if all the queens are defeated and imprisoned.

Info on the battling system

Info on the imprisoning system

Rewards to choose from[]

If you are in the top 10 of a category (most victories, most unconcious pets and most builds), you are awarded with a special medal.